Another World is a science fiction themed game happening in a strange and beautiful alien world. After a risky nuclear physics experiment, the hero, Lester Knight Chaykin, suddenly finds himself lost somewhere in this world. His obvious goal is to find his way out and get back to his home world. (Nevertheless, this obvious goal would not be the final one. To know more about the game itself read this review.) In this short article, we will draw the parallel between two sublime scenes found in this video game and a general settings of Asimov's Robot series. For those of you who don't know Asimov's Robots, it is a series of short stories and novels about robots set in the Earth's near future. The space expansion era has just begun and robots are looking more and more like humans.

Panorama of the alien city 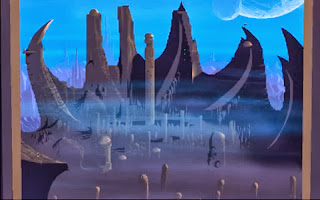 The first scene can be found here. It presents us with a look through the prison window as the breathtaking panorama of the alien city slowly appears. At this moment, the subtle dialectic (technical term for the unity of opposites) of open and closed space is about to happen. We are looking at the alien world through the eyes of the hero trapped in the alien tower. Thus, his physical viewpoint alone conveys the feel of the closed space. On the other hand, we see the infinitely looking immensity of the alien city outside. The contrast between the closed finite state and open immense space is clearly depicted.

Our hero is put right in the middle of this ontological "drama". Being caught in a prison of the alien tower, he is closed in the tower's interior. And yet, he wants to escape it trying to find his way out. This "out" signifies not only the city outside the tower, but also and primarily the great beyond, the "outer" space that lies over and above the bounds of the alien city (see the game ending).

Infinite descending of the urban abyss 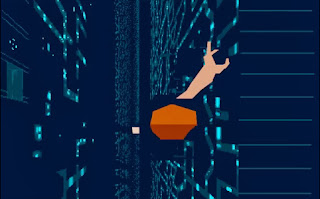 The second scene that we're going to analyse can be seen here. Our hero is shown from the top down perspective falling down. The abyss he is falling into is not a natural one. It is embedded in the heart of the alien city. In so far as it is an urban structure, it represents closed space. Namely, city space in general results from the spatial disposition of barriers such as streets, walls, roofs etc. These barriers are closures of the natural landscape openness. And yet, this abyss seems to be going down endlessly. It is this very opposition between the urban closed space of the abyss and its infinite descending that is so intriguing in this scene.

Dialectic of openness and closure in the Asimov's Robot series

This short analysis shows us the possible ways of the the diegetic space (the imaginary space inside the game world) stratagems in the narrative aspect of the video game. Its dialectic of openness and closure is akin to the dynamic presented in the Isaac Asimov's novels The Caves of Steel and The Naked Sun. In the first novel, the closure of the urban space is emphasised by the steel cupola build above the city. The city is literally isolated from the outside world by its vaulted ceiling. Its light and whether conditions are generated artificially. Thus, the connection between artificial and closed is hinted by the novel (we will not explore it in this article). While the steel barrier is protecting the city from the open nature, the naked sun signifies the open space unprotected by the urban structures. 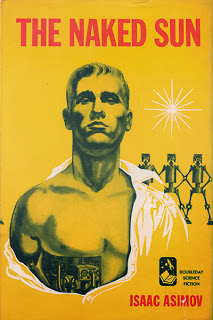 The nakedness of the sun can hurt your eyes. At the same time, it is very tempting to look directly in the sun without wearing the eye protection. To put it simply, we are simultaneously  frightened and attracted by the open space. We feel safe and protected in our pocket universe. But then again, we are always tempted to leave it, fascinated with the infinite reaches of the open space.
Posted by Unknown at 4:45 PM